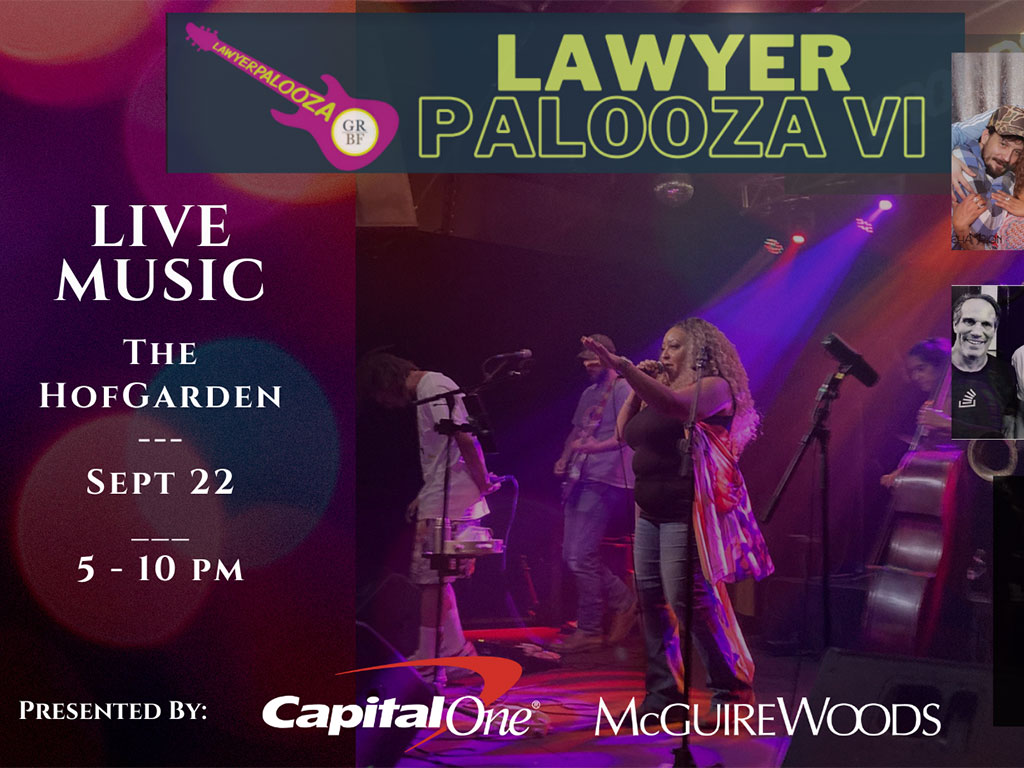 Lawyerpalooza is back for number VI! Join us for a night of networking, music, and fun from 5-10 pm on Wednesday, Sept. 22, 2021, at The HofGarden. Proceeds will help support the Greater Richmond Bar Foundation’s (GRBF) mission to expand access to Justice.

Ticket entitles you to venue access, one drink, hors d’oeuvres, and a good time!

Fevered Train 6:00 – 7:00 p.m.
Fevered Train is a group of musicians from Richmond, Virginia. The group was originally formed with guitarists Ali John Amirshahi and Greg Layton playing originals and rock covers. The rhythm section has gone through transitions and different variations. Current drummer B Skala was unavailable for this show, so the Train added fellow lawyer Wayne Morgan to handle the drums with long-time Richmond bass man Keith MacPhee, who also plays with the Tin Can Fish Band. Greg plays acoustic guitar, and Ali plays electric, and both of them sing with Keith adding harmony vocals. In addition to original material, Fevered Train covers material by The Rolling Stones, Neil Young, Grateful Dead, Allman Brothers, and many other classic rock and blues icons and more modern stuff by Cracker and Amos Lee.

Wild Common 8:00 – 9:00 p.m.
Wild Common is a genre-defying “New Appalachian” band out of Charlottesville, Virginia. Frontwoman Davina Jackson is a soul and gospel singer with a killer voice at the center of the band’s music. She used to sing back-up with the Wailers. Fiddle player Nate Leath won the famous Galax Fiddler’s Convention when he was 11 and has since grown into one of the most talented fiddlers of this generation. Drummer Rob Hubbard grew up in rural Virginia and went on to become an accomplished reggae drummer. Bassist Dhara Goradia has a long jazz pedigree. And songwriter and guitarist Brennan Gilmore has roots in old-time and bluegrass but has played fusion music across the globe.
In the late summer of 2017, all of these musicians from diverse musical backgrounds holed up at a farmhouse outside of Charlottesville to hash out some tunes. And immediately it clicked. They weren’t trying to force different genres on top or beside each other, but were just taking songs at their essence – a melody and harmonization – and constructing them by playing as their individual traditions and backgrounds formed us to do. The result is refreshingly new, but also strangely familiar.

Tommy Bishop is a guitarist from Richmond.  He entered the legal profession after a decade-long career as a Spanish teacher (he still answers to “Señor”), having earned his J.D. from Washington & Lee University School of Law in 2018.  He also holds a B.A. from VCU and a Master’s in Education from the University of Richmond.  Tommy lives in Lakeside with his wife, who dutifully puts up with his squealing electric guitar at all hours of the day and night.

Steve Mutnick practices primarily in the areas of criminal, traffic defense, and as private counsel in civil cases, including custody and visitation.  Steve regularly practices in the counties of Chesterfield, Henrico, Hanover, Richmond City, Powhatan and other jurisdictions in central Virginia.  He is certified by the Indigent Defense Commission as defense counsel for misdemeanors, juveniles, and felony cases.  Steve regularly represents those accused of serious criminal matters.  Steve entered private practice in 2013 after serving as an Assistant Commonwealth’s Attorney for five and one half years.